Openshot is a free and open source video editing program, known for it's ease of use, it's popular on Linux (frankly there aren't many other options in that division) and it has been on version 1.4.3 for quite sometime now!

Recently Open shot 2.0 was released as a Beta for people who funded the kickstarter campaign back in 2013, and today it was released for the public. I downloaded it and gave it a spin. 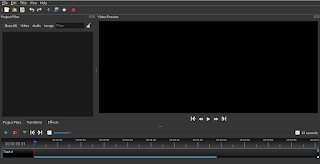 Openshot is cross platform, which means you can enjoy it on any platform you work on, and it's also free of charge, I've been using the older version 1.4.3 and it's easy to use, all you have to do is read the included help file and you are good to go. The new version is even easier to use!

What's new with the new version?

t comes with it's fair share of improvements, and if you like to read them all you can go to the announcement page on the developer site, I think the most important feature is the autosave and recovery after crashes, it's been quite a hassle to lose your work between saves, so saving automatically is something good!
t still crashes, a lot! It crashed several times while testing for this post! It's a beta and I understand work needs to be done, but crashing like that is very bad..
'm planning to post more about open source multimedia tools, this was the video editing tool, it's still needs work to do but I think it's a good project and a good effort!
hope the final version is ready in time for the release of Ubuntu 16.04, that will be awesome!

I wouldn't recommend installing
it now being a beta and all,  but if you want to give it a go, I'll be sharing the links!