Living in madness, Tripoli under siege

Think of this as the second part of my post: Blogging from a war zone, things are getting worse by the day sadly, with no signs of relief.

The United nations claim it wants a political solution in Libya, two years later Libya is more divided than when the UN got involved! How many governments on the ground claim to have legitimacy?
All the UN does is feed migrants and issue worried statements, while feeding migrants is a good thing, Libyans are struggling to survive daily and worried statements won’t put food on the table.

The third coup in 2 and a half years happened a few days ago, and both governments are still in Tripoli claiming to be calling the shots and exchanging threats of prosecution and stressing that they have legitimacy while the other is a fraud! And that’s just in Tripoli!!
No one knows who is ruling the country or who is in control now.

How could the people survive without basic health care? With gangs killing and kidnapping people and looting everything in sight? With no money in the banks to draw? With electric power that goes out for up to 12 hours a day, everyday! 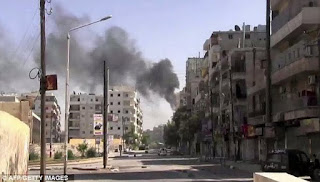 Living on the edge of an ongoing war


Every night there is a battle between militias over trivial things at times, and during the day checkpoints are scattered across Tripoli, you might get picked up for looking at them the wrong way or for simply being from an area they had a clash with last week!
Where you wind up from there is unknown, you will be lucky if they call for ransom, or you could wind up dead on a side road or a dumpster somewhere..

It sadness me to see women and old men sitting on the floor in front of banks since dawn waiting for the possibility to draw some money (banks didn't recevie money from the central bank for over 40 days) while being verbally and physically abused by militias.
To be honest I'm not doing much better than them, I too get my share of abuse and I was in the middle of a bank shooting -luckily no one got hurt that day- others weren’t so lucky.
As a result I wasn't able to draw money out of my bank account for over 6 months.

The Libyan dinar lost 73% of it's value to foreign currency, this resulted in inflation of prices, some goods went up 200% and 300% of the original price! Only in Libya you see increases like this!
Most goods are bought by merchants with government support (government rate for the US dollar) and then sold back to the people at the black market rate (3 times as much as the government rate), and some locally produced goods like Tuna is exported without customs to neighboring countries to be exchanged in US dollars, later sold on the black market, which made these goods rare and in demand, which raised the prices even higher in return.
And yet no one bats an eye..

As a result of the current situation 1.2 million children in Libya are out of school, and the school year was delayed simply because they don’t have sufficient funds to begin the school year!

All that and no one bats an eye!!

And everybody is quite and living a normal life? That is an outrage!
I really don't know how do these people do it? It's either the most persistent group of people I have ever seen or they just succumbed to the fact that things are what they are and could potentially get much worse.
I realize that people are afraid of getting killed by militias as it happened several times before, it's not the smartest thing in the world to confront drug crazed gun men with protests, but there are other options.

What about a city wide strike?

Just sit home and stop going to work for a few days, if everyone did this then we can make a change.
You will be surprised how fast every issue will be resolved, this is how you negotiate.
Let's look at it that way: You are unhappy at your work, you aren't getting paid, but you show up daily and work like everything is OK! What kind of logic is that?
If you keep being quite will will be butchered one by one and no one will bat an eye when its your turn..

The date of this post marks 5 years since the rebels killed col Gaddafi 5 years ago in Sirte, it gets you to think what a landslide the last 5 years has been, regardless of your political opinions.