Should you replace your SSD after the COMRESET failed (errno=-16) error?

It is a scary boot screen to wake up to, but things aren't that simple really, should you throw the SSD in the trash and buy a new one? Or simply ignore the message like it didn't happen? Well today we will look into it with more detail.

I've been having this error now (on and off) for over a year, the disk works fine but tends to throw an error every now and then, I am running Ubuntu Gnome 16.04 and the bug seems to be affecting Linux alone. 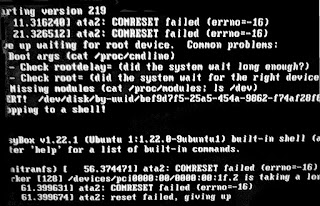 When contacting the manufacturer of the drive (silicon power) they suggested to update the firmware via a utility on the website, since it's Windows only I had to remove Linux, install Windows to update, and then come back to Linux.

Since it started I'm backing up my data daily and creating images with parted magic every week, so far the disk hasn't died on me (reached around 6400 hours, and the bug appeared in 4000 for the first time).


Do you have to replace the SSD right away?

From my experience, it's not necessary to replace the drive right away, but backing up is a must!

I've installed Gsmartcontrol and set the system to check for errors on startup (was recommended to do so on Askubuntu) and it's reporting no errors on all tests (short, long and contingency).

I do recommend that you get the drive checked, and if possible send it back if it's still under RMA.

I swapped out the SDD with the old HDD due to an increase in the COMRESET failed (errno=-16) error, I guess my laptop is showing it's age, and I am due to replacing it soon anyway.

Are you suffering from this issue too? What did you do to fix it? Please comment below.

Even after getting a new HDD, I still get the same error message! While the same SSD on another device doesn't!!